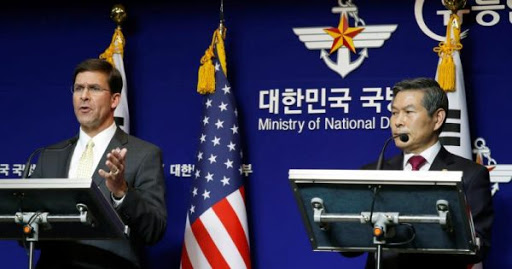 Nagoya (Japan), Nov 23 (EFE) .- Japan and South Korea have taken a little breather in their prolonged diplomatic and commercial clash on the occasion of the G20 Foreign Summit held today in Nagoya, which did not produce any progress of highlighted for this multinational forum.

Tokyo and Seoul were the protagonists of an unexpected rapprochement in their positions just before and during the Nagoya meeting, reducing a conflict that had spread to the defense area and that generated increasing concern about the risk of destabilizing the alliance. of trilateral security with the United States in the region.

The conciliatory gestures of the foreign ministers of Japan and South Korea were the highlight of a G20 meeting in which some of the key countries sent low-profile representatives, and whose agenda was limited to supporting previously agreed issues. at the leaders’ summit last June.

A BITTER-SWEET FAREWELL TO JAPAN

The Nagoya meeting puts an end to the Japanese presidency of the G20, which passes the baton to Saudi Arabia after a year in which the meetings of the club of the twenty most industrialized and emerging countries have been marked by commercial tensions between all its members and other divergences.

In this context, the Foreign Ministers wanted to close this round of meetings by supporting the reform of the World Trade Organization (WTO), one of the few points where there is a general consensus, along with the coordination of fiscal policies, which will include the future application of the so-called “digital rate”.

“As confidence in multilateral frameworks is being undermined, the G20 shares the view that the WTO must be urgently reformed to resolve different issues,” said Japanese Foreign Minister Toshimitsu Motegi at the press conference. final.

Among the reforms supported by the world organization created in 1995 is the possibility of improving the mechanisms to resolve trade disputes, a measure that the US, Japan and other countries have been advocating to deal with problems such as the unfair practices of which they accuse China.

However, the US representative in Nagoya was Under Secretary of State John Sullivan rather than US Secretary Mike Pompeo, which in part demonstrates a clear disinterest by the Donald Trump Administration in multilateral forums such as the G20.

Japan managed at least that the meeting served to save “in extremis” the military intelligence exchange treaty with Seoul that was going to expire this Friday, a measure welcomed with relief both by the Japanese government and Washington.

The Japanese Foreign Minister and his counterpart from South Korea, Kang Kyung-wha, also announced that they are preparing a bilateral meeting in December between the leaders of both countries, Shinzo Abe and Moon Jae-in, which would be the first in more than a year and it would provide another opportunity to overcome their historical disputes.

EXISTENTIAL DOUBTS IN THE G20

The lack of unity within the Club of Twenty when tackling global challenges such as climate change or the rise of protectionism was exposed at the Osaka leaders’ summit last June, which closed with a joint declaration of minimums after long deliberations.

The European Union (EU) and countries like France then called for reflection on the viability of this forum in its current format, and even proposed acting in smaller teams -such as the G7 or the community club itself- to achieve more ambitious progress in all areas.

The current acting Spanish Foreign Minister and the next head of European diplomacy, Josep Borrell, nevertheless defended the importance of the G20 to face new global economic shocks.

“The G20 was born between 2007 and 2008 to respond to the financial crisis, which at that time hit us very hard in Europe and Spain,” Borrell recalled in statements to Efe after participating in the meeting.

“Now that we are constituted, and that problems are coming again in the world economy, it is good to use this instrument to take preventive measures,” said Borrell, who added that multilateral dialogue “always experiences moments of challenge.” EFE